The Unique Optimism and Joy of Sense8 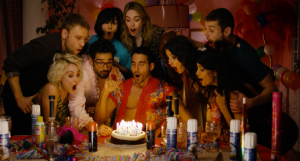 Netflix has just cancelled Sense8. There are probably countless opinion pieces out there in the Internet: this one is mine. To summarize: Sense8 was really dear to me, and I’m sad to see it go.

There are a couple of storytelling tropes that I really dislike. One is Bury Your Gays. It’s basically the assumption that unless an important fictional character is a member of the sexual majority, they cannot have a happy ending; instead, their story will be tragical and painful. You can claim that the trope is used to highlight the plight of sexual minorities, but honestly, it often feels a lot more like making sure that the icky LGBTQUIA+ people are only there as local colour, and do not detract from the Straight (Probably White) Couple, which is the major romantic pairing.

It ties to numerous things that are wrong with storytelling that has to sell a lot: that the main character needs to be “market safe” (i.e., a white, brown-haired cishet gruff dude) and deviancy from the norm must be punished. If the scary queers aren’t killed, they must at least be pushed to the fringes. The queer folk can have their own stories focusing on their strange homo peculiarities, but in entertainment that actually has to sell they must not have too large a role. As a fan of visually impressive science fiction (that tends to be rather expensive to make), I run into this a lot. I feel that visual stories that I like have to be marketed to the imaginary 34-year-old slightly homophobic and not too smart Average Person; at worst, the Average American Person. Y’know, the kind of statistical weirdo who in their last presidential election was really undecided on who to vote for and could have gone for either one of the candidates, really.

So imagine my delight when I found a high-end show which took a look at all this, and said, pretty much, “Fuck all that. We’re going with a globally diverse, weird sci-fi plot with martial arts and gunfights and explosions, and we’re going to have eight main characters, who are basically all more or less pansexual and kind of poly, at least telepathically. And since it probably doesn’t really count if it’s just all in your head, let’s have one character who’s trans, and another who’s outrageously, delightfully super gay. Let’s bring in two women whose society really doesn’t appreciate them at all. Let’s have one of the main plots focus on what it’s like in Nairobi, since Africa gets hardly any play in popular fiction. And let’s make sure these guys get their share of drama, but let’s not let it get them down.”

Ladies, gentlemen and others: Sense8.

Sure, it had the whitest Chicago white cop who ever white copped, and his cute blonde girlfriend as the token marketable het couple. But it had them doing hard drugs without moralising. It had a bus driver from Nairobi who’s a fan of Jean Claude Van-Damme. It had a transgender hacker and her queer activist girlfriend, who absolutely does not even think of abandoning her lover when the going gets tough. And it had my personal all-time favourite: Lito, the fantastically gay Mexican action movie star, his supportive boyfriend, and eventually, their sort-of girlfriend. It had a delightfully silly science fiction premise that was mostly used as an excuse to get the characters into outlandish situations, and have them get out of it by helping one another. It was a simple, even childish premise, but man did it ever work for me. Of course, the sex and the fights helped a lot.

Even though I love painful drama and tragedy, I found that it was truly marvelous to watch a show where, for about the first time ever,  a romantic relationship of three people is not used as a cheap lever to break any of them, or to show that the world will destroy those who are different. Sure, the world is going to try. But in Sense8, the world will fail. Sense8 was the kind of show where you had an African shantytown as one of the main locations, with characters living there sharing the same basic humanity and emotional range as those in San Francisco or Seoul. Sense8 was a show where there was no doubt where the sympathies of the people making it really lay. “These are our people”, the Wachowskis can be practically heard saying, “and they kick ass!”

I cannot claim to be objective about the quality Sense8, because the series was so completely tailored to my personal tastes. Sure, it had its faults, and at times there were things that annoyed me on a plot or storytelling level. However, one thing is not up to dispute: there has been nothing else like it on the small screen. It was an absolutely unique blend of bizarre science fiction, globetrotting, queer drama and endearingly silly action scenes, all wrapped with a bow of optimism and delight. It was a happy and hopeful story about the kind of people who all too rarely get any kind of hope in our entertainment. It really was too good to last. I’m sad that we don’t seem to be getting any more. But more than that, I’m overjoyed that we’ve got the two whole seasons that we did.

If you haven’t watched it yet, you probably should.

Addendum (Jun 29th): Four weeks later, Netflix partially relents, and gives the series an additional special to end the story. Sure, this is not perfect, but in an imperfect world, I’ll take it and cherish it. Happy Pride week, everyone!